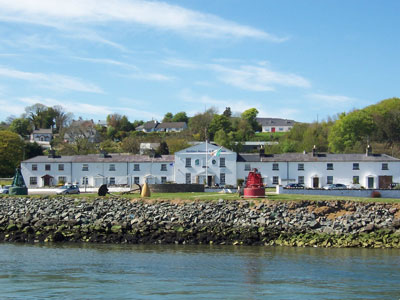 The Museum is located in the old coastguard station on Greencastle harbour, overlooking one of the busiest fishing fleets in Ireland, with magnificent views over Lough Foyle and Co Derry. It is situated beside the Greencastle – Magilligan ferry.

We also have a Coffee Dock Click here for more details.

The origins of the museum can be traced to an initiative to use local history to promote tourism in the Inishowen Peninsula. During Heritage Day in 1990, a group of maritime history enthusiasts organised a display of local artifacts and photographs. The quality and quantity of the material collected led the group to believe that there was potential for a museum dedicated to maritime history. In 1994 a committee was formed and the central dwelling and adjoining dwelling of the coastguard Station in Greencastle, overlooking the harbour were purchased from the OPW by local fundraising and donations. IFI and Leader I funded the technical advice and restoration work.

A memorial to all those from the Inishowen Peninsula who have been lost at sea was erected in front of the Museum.

A wide network was established during the course of the fundraising and restoration work and suitable material was sourced for display. The material ranged from original photographs to boats from 6 to 50ft in length. These larger pieces were housed in a custom built extension funded through grants from IFI, INTERREG, Leader II and Donegal County Council. This extension now also includes a Planetarium.

The Museum is at the heart of the local community, we have built up an impressive collection of artefacts and memorabilia because of the generous loans and donations provided by the community. This has enabled the museum to promote the local culture and heritage in an area were most traditions have been neglected. The continuous support and information provided by the community has contributed to the company’s continuous development and enabled the museum to successfully identify the community needs.

The Museum has seen tremendous changes since it opened in 1994. It was always intended that the Maritime Museum & Planetarium would be developed in three phases. Phase 1 was the purchase of the premises, the old Coastguard station from the O.P.W and the renovation from its dilapidated state to a small museum.

Phase 2 involved the extension to the premises to include a boat display area and gallery as well as a custom built Planetarium.

Phase 3, was to bring the Museum to the standards required to be an accredited museum under the Heritage Council plan.

A wide network of contacts has been established during this project. The Maritime Museum has been acknowledged as an important heritage and tourism resource in this county. The Museum has worked hard this past number of years to increase the standard of service all our stakeholders from, staff, visitors and the local community.

The main Mission of our organisation is to promote and conserve our local maritime history, culture and to encourage a sense of responsibility for our local heritage through preservation and education.

Our project have received awards over the years, such as the Gulbenkin award for most improved voluntary Museum, AIB Better Ireland Award and was shortlisted for under the Museum of the Year Awards through the Heritage Council in 2005.

Up until 2005, the Museum had received support under FAS Social Economy Programme, and in 2006 has been supported by POBAL community services programme.