We are closed due to COVID-19 restrictions.

Inishowen Maritime Museum & Planetarium is located at the Old Coast Guard station over looking Greencastle Harbour on the banks of the beautiful Lough Foyle. It is situated beside the Lough Foyle ferry entrance; this passenger/car ferry service runs between Greencastle and Magilligan, Co. Derry

Note: During winter hours, planetarium shows are not presented at pre-set times. As long as a staff member is present to run the shows, they are available anytime on a walk-in basis. (min 6 persons for unscheduled shows during winter opening hours)

On Thursday last, the Norwegian ambassador, Else Berit Eikeland, visited McDonald Boats, in Greencastle, to officially launch a programme of exchange projects between 2 districts in Norway and several organisations in Inishowen.
The projects have been co-ordinated by the Inishowen Maritime Museum, in Greencastle.
The first project involves exchanges between Inishowen & Norwegian traditional boat building enthusiasts. The museum has been granted funding by the Fishing Local Areas Group (FLAG) to restore two traditional fishing boats, a drontheim and a half-decker, in McDonald Boats. During the restorations boatbuilders from Trondheim Maritime Museum & Boatbuilding Centre will visit Greencastle to take part in the restoration work. Next year, local boatbuilding enthusiasts will visit Trondheim to take part in a similar project there.
The other project involves educational programmes involving the 5 secondary schools in Inishowen and schools in the Bergen district of Norway. The projects will have maritime and environmental themes. Teachers from Scoil Mhuire, Buncrana, have been invited to Bergen, in March, to tease out the finer details with schools in the Bergen area.
It is also hoped to widen the programme to include a connection around traditional fiddling in the Norway, Western Isles of Scotland and Donegal. The Hardanger fiddle is both a musical instrument and a technique. Fiddling traditions and methods in Donegal are unique in Ireland and are closer to Islay than to Mayo. The methodology is thought to stem from Norwegian techniques that travelled to the Faroes and down the Scottish Islands to Donegal. A partner group in Inishowen has been identified and the Ambassador will be seeking a Norwegian counterpart to move forward with them.
In separate developments, the director of the “Coastal Heritage Week” programme in Norway has been liaising with Donegal Tourism and Inishowen maritime heritage groups to promote coastal tourism in Donegal, based on the successful Norwegian model.
The Norwegian district council is applying for EU trans-national funding for a project around the heritage & culture of the trade routes between Norway, the Faroes, the Western Isles and Donegal. This could link with a trans-Atlantic programme between Inishowen, Newfoundland and the Canadian maritime communities currently being developed. 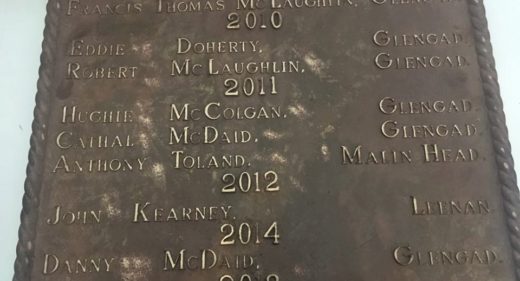 This year’s Blessing of the Fleet at Greencastle will include a very special event which will commemorate those from Inishowen who lost their lives at sea. The Inishowen Maritime Museum has been working tirelessly over the last year to update the existing memorial and ensure that all those who tragically lost their lives in the waters around us will be remembered. The existing memorial was unveiled in 1997 by President Mary Robinson. As further research was carried out over the years it was realised that many more had lost their lives at sea that had not been previously recorded on the memorial. Realising how significant it was for the families who had lost loved ones it was decided that new panels would be installed to include anybody who had not been included before.

May the Fourth be with You Festival

Kjell Magnus Økland will be organising visits by Norwegian traditional boat builders and maritime heritage enthusiasts to Ireland over the coming season.
Kjell is a journalist, photographer, film maker & webmaster and has been an organizer and promoter of cultural and maritime events for more than 25 years. He sails both traditional and modern boats.
Kjell, and his family, will be visiting Inishowen on 25, 26 & 27th February for a preliminary tour of maritime culture and heritage promoters in Donegal and will be based at the Inishowen Maritime Museum, Greencastle.
Kjell is the managing director of the Coastal Heritage Weeks Foundation.

In November 1912, Roald Amundsen, the Norwegian polar explorer, delivered a lecture to the Royal Geographic Society, London, describing his expedition to the South Pole.
The lecture was accompanied by slide photographs taken on the expedition. The quality and clarity of the photography is amazing.
The Fram Museum, Bygdøy, Oslo, is dedicated to telling the story of Norwegian polar exploration.
In 2006, the negatives of Amundsen’s polar collections were donated to a public / private partnership in Norway and are archived in the Norwegian National Library.
The Fram Museum used this access to create exhibitions, and accompanying book, about Amundsen’s polar expeditions. Using the original photographs and notes and reports of the expeditions, the museum has created an entertaining and informative display.